visita a Yosemite / visit to Yosemite 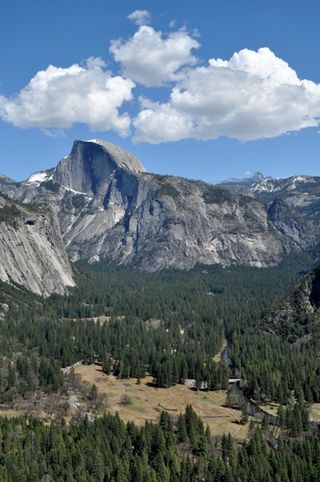 Half Dome and a portion of Yosemite Valley

Every day is Earth Day (la Giornata della Terra). Yet, spending the day in Yosemite National Park made for a special celebration this year. Yosemite is one of the most famous parks in the US and rightly so. 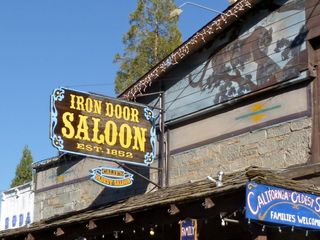 We spent the night before and the night after our visit to Yosemite at the Hotel Charlotte in Groveland, across the street from the saloon above.

Groveland was originally a gold rush town and then became a sleepy farming community until the San Francisco Hetch Hetchy water project made it their headquarters and built a railroad yard and hospital for the work crews (both now gone). From 1915 till 1935 Groveland was a boom town supporting seven hotels, 10,000 residents and much activity. [source]

Reading a few signs in Groveland made me realized that a number of Italian immigrants settled there: Laveroni, Cassaretto, DeFerrari.

The week prior to our visit, it had snowed, but we had perfect weather, a bit too warm, if anything. There were a lot of people in the Valley, especially around the Visitor Center, but it was not difficult to escape the crowd, since the vast majority of people don't hike on the trails. 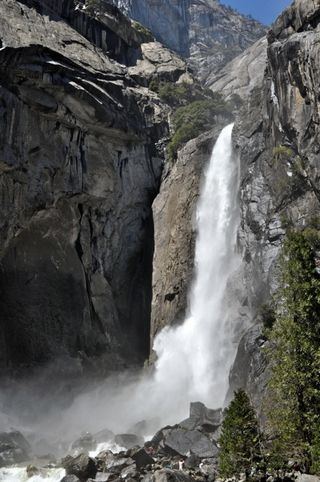 Yosemite in the spring means its waterfalls (cascate) are full and offer an amazing show (spettacolo). The three sections of Yosemite Falls — upper, middle and lower — combine to form the tallest waterfall in North America at 2,425 feet. A one-mile loop trail (sentiero) leads to the base of Lower Yosemite Fall (photo above). 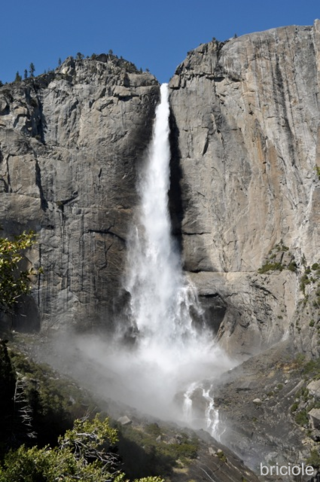 You can hike all the way to the top of the Falls (it's an all-day hike). We started on that trail and turned around after reaching the view point where I took the photo above. Seeing Yosemite Falls in its powerful spring beauty, it is difficult to imagine that it goes dry in the summer. (The video on this page shows also what happens to the fall during the winter.)

or launch the visita a Yosemite audio file [mp3].

Fascinating! Never been here before.

Ciao Alessandra. It's a special place.