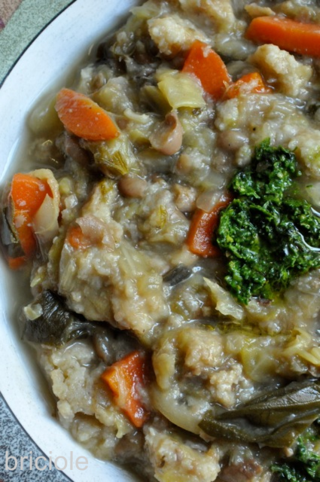 Our tour of the 20 regions of Italy organized by Trattoria MuVarA brings us to Toscana (Tuscany). Though I like Firenze (Florence) and have been there many times, my favorite Tuscan city is Siena, which I featured in this post written after our most recent visit. (Siena is relatively close to my home town of Perugia.) 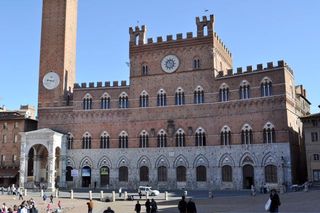 Siena was the second Italian city my (now) husband visited with me and we both have vivid memories of that occasion. I have always liked the famous Piazza del Campo, but seen my husband's jaw drop when, at the end of a narrow street, the view opened upon it, was a reminder of just how unique the place is.

To prepare something in honor of Tuscany, I went to my wish list and got to the letter "r", where I found ribollita, the famous Tuscan soup. The word ribollita literally means "boiled again." One day you make a pot of soup, then you add bread slices. The day after, you reheat it and it becomes ribollita. There is a bit more to it, but that is the basic idea.

In her cookbook Cucina Povera, Tuscan Peasant Cooking, Pamela Sheldon Johns has a recipe for ribollita that includes a timetable suggesting what to do with the soup on day 1 through 4. Here you can read Sheldon Johns' headnote and recipe, here is the version given by Kyle Phillips, and here is the version by Frank of Memorie di Angelina. Finally, this is the recipe on the Accademia Italiana della Cucina site: it is in Italian, but I am putting the link here anyway, so you can see that no quantity is given for any of the ingredients.

I never had ribollita when visiting Tuscany, which freed me from memory-based constraints. I had the intention to stay close to the tradition, but in the end I took liberties, so, I decided to call the soup I made for the event "ribollita-inspired." However, by using some things I had in the vegetable crisper (mostly from my vegetable patch), I was true to a philosophy that is dear to my heart: you use up everything you have, trying to turn it into something flavorful and healthy. 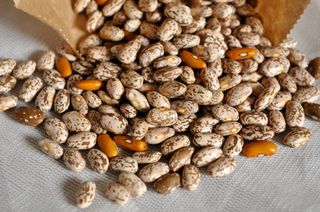 As part of my most recent grain CSA share, I received some local dry pinto beans  and decided to try them: most recipes I read use cannellini beans, while one uses zolfini beans (I have some of those, but that's a story for another day). 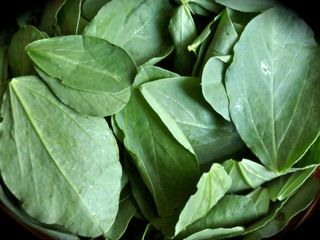 At the farmers' market, I found fava bean leaves (foglie delle fave), also called fava greens, which I had never tasted and had to try so I used those instead of cavolo nero (a.k.a., dinosaur, Tuscan, or black-leaf kale).

Once again, I make no claims about my rendition, but the spirit is there. This being a popular dish, recipes tend to be family-based and also seasonal. And in true popular cuisine style, I didn't weigh anything, so the recipe is a list of ingredients — which makes me laugh since such a behavior used to upset me when I asked my mother for one of her recipes.

The recipes I have read instruct you to drain half the beans, and set those aside, then to mash the rest with the cooking liquid. I mashed all the beans in their broth, using a potato masher (so the result was not smooth), then added everything to the soup pot. 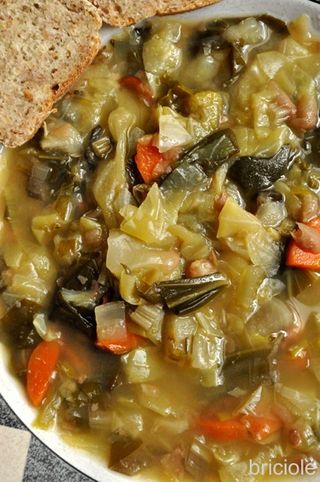 You can serve the soup at this point, by itself (as in the photo above), or ladled in bowls in which you have previously put a layer of thin bread slices. If you do the latter, cover each bowl and keep warm. Let the bread soak up the broth for 15 minutes or so, then serve. In this case, we can call it minestra di pane (bread soup). You can skip this part and go for the ribollita stage.

Put a layer of bread slices in another pot (again here, a terracotta one would be great), and pour soup on it. Depending on how much soup you have, make another layer of bread plus soup. Let the bread soak up the broth for several hours or overnight. When you want to serve the soup, reheat it. If you want a less dense soup, add a bit of water. Gently stir while reheating (this will break the bread), then serve hot with a bit of olive oil drizzled on top.

The splash of green in the top photo is a sort of pesto I made with the leftover fava bean leaves. It is not necessary of course, but it looks nice, doesn't it? The soup was excellent in all versions.

If you become a fan of ribollita, you can learn to sing this song. Here are the words of the first part:

how delicious, how delicious is ribollita
and if reheated, it's even more delicious
if you want to be healthy in this life
eat some ribollita often
and when you've finished it
you can also lick your fingers

This is my submission for the fifth installment of the Abbecedario culinario d'Italia (Italian Culinary ABC), an event organized by Trattoria MuVarA that will bring us to visit all the 20 regions of Italy using the alphabet as guide. E come Empoli is hosted by Cinzia of Cindystar. This post contains the list of contributions and a slide show.

I am also sending this to My Legume Love Affair 46, the current edition of the popular, legume-centered event created by Susan, The Well-Seasoned Cook, and hosted this month by the creator herself. This post contains the roundup of the event.

And this hearty soup is perfect for Souper (Soup, Salad & Sammies) Sundays, a weekly event created by Deb of Kahakai Kitchen. This post contains the roundup of the event.

A very tasty and unique soup. Never had fava leaves before …love the idea.

Thanks for the mention, Simona. You've put me in very distinguished company! Ribollita truly is a marvellous dish. Loved the song!

I love all your adaptations and I am very intrigued with the fava leaves too. ;-) Thanks for sharing with Souper Sundays this week! ;-)

Ciao Ivy, I got more fava bean leaves yesterday and will come up with other ideas to use them. They are actually good to eat raw in salads.

I've never been to Sienna before. Now I want to visit -- and eat ribollita. The song certainly makes me want to make eat it. ;-)

Ciao Frank. I really like your rendition and your nice pentola di coccio (this is how we call it in Perugia).

Simona, I love ribollita, and the song you quoted is such a great way for me to enhance my enjoyment of the soup. I agree with you completely--use up what's in the frig--no need to go out and buy anything specially for it!

Hi Deb. I got more fava leaves and will experiment again with them. Maybe I'll have a salad for a future edition of your event ;)

Ciao Paz. Siena is a beautiful city, so I hope you'll visit it one day.

Ciao Molly. I am glad to read you are also a fan of ribollita. You'll probably be able to eat some when you are in Tuscany in September. And you can tell the hosts about the song.

What a great looking soup! Our weather has been so cold and rainy, soup sounds perfect. We loved Siena - everything about it. I would love to go back and stay in the city for a few days. We were renting a house... near Perugia '-)

Hi Katie. With cities like Siena and Perugia, I think staying in them for a few days is ideal: you can walk around and enjoy the feel of the place. So, I hope you get to go back to Siena for that (and to Perugia ;)