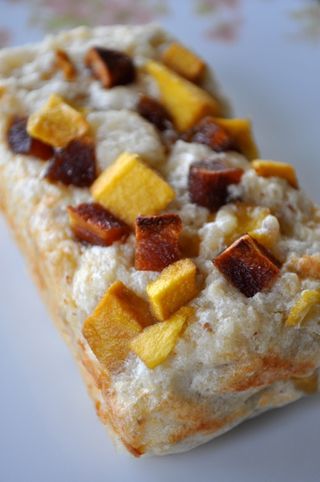 "Oh, mamma, that shows you never saw Mr. Thornton. He looks like a person who would enjoy battling with every adverse thing he could meet with — enemies, winds, or circumstances. The more it rains and blows, the more certain we are to have him. But I'll go and help Dixon. I'm getting to be a famous clear-starcher. And he won't want any amusement beyond talking to papa. [...] You know I never saw him but once, and then we were so puzzled to know what to say to each other that we did not get on particularly well."

"I don't know that you would ever like him, or think him agreeable, Margaret. He is not a lady's man."

Margaret wreathed her throat in a scornful curve.

"I don't particularly admire ladies' men, papa. But Mr. Thornton comes here as your friend — as one who has appreciated you" —

"The only person in Milton," said Mrs. Hale.

"So we will give him a welcome, and some cocoa-nut cakes. Dixon will be flattered if we ask her to make some; and I will undertake to iron your caps, mamma."

By the time I read this passage in Chapter 9 (Dressing for Tea) of Elizabeth Gaskell's novel North and South, I had already seen the BBC movie and so I knew how the story would progress.

Since we don't watch TV and don't really follow TV-related news, I choose DVDs based on interest. My husband and I like period drama and the BBC productions are usually very good. We had already seen Wives and Daughters and Cranford adapted from Gaskell's novels, so North and South was a natural choice. Little I knew how much I would like the movie and then enjoy the book as well. I also didn't know that the movie was such a great success.

In this novel, Gaskell takes a close look at labor tensions in Milton, a (fictional) industrial city in the north of England. John Thornton, the male protagonist, is the owner of a mill. Margaret Hale is the daughter of a clergyman who leaves the Church of England and moves the family from rural Helstone, in the south of England, to Milton. Every time John and Margaret meet, they collide. The way their relationship evolves is quite interesting.

Two other characters that are important in the book and got amazing performances in the movie are Mrs. Thornton, John's mother, and Higgins, the mill worker whose daughter is befriended by Margaret.The scene where John proposes to Margaret reminded me a bit of that of Mr. Darcy proposing to Elizabeth Bennett. North and South is very different from Pride and Prejudice and yet there are some subtle links, as pride and prejudice play a role in both novels.

There are plenty of videos on YouTube showing scenes from the movie, but if you have not seen it, I would recommend you watch it from the beginning and enjoy each of the episodes. And yes, there are differences between the book and the movie, because they are different media. For example, while the book can follow Margaret analysis of her feelings and of her tormented conscience (she has lied to a constable and Mr. Thornton knows, but she cannot reveal to him the reason why she did it) the movie has to show this. This is a story in which people change due to events and also other people's influence. For example, Higgins ends up establishing a relationship with Mr. Thornton, who becomes his employer after being the enemy during the workers' strike. In the movie this relationship is nicely portrayed.

The final scene in both the novel and the movie is heart melting. They two scenes are different in setting but they show the same event: both Margaret and John come to acknowledge their feelings for each other. All right, I will go so far as to admit that North and South has turned me into a great fan of Richard Armitage. (Watch the movie and you'll agree with me.)

Going back to the excerpt which opens the post: As Margaret explains, she and Mr. Thornton have met once before and the meeting was not particularly successful. Right after the scene in the Hale's house, in the same chapter, we see Mr. Thornton getting ready for the visit. Her mother warns him against Miss Hale: she casts her as the poor girl looking for a rich husband.

"Mother" (with a short scornful laugh), "you will make me confess. The only time I saw Miss Hale, she treated me with a haughty civility which had a strong flavour of contempt in it. She held herself aloof from me as if she had been a queen, and I her humble, unwashed vassal. Be easy, mother."

"No! I am not easy, nor content either. What business had she, a renegade clergyman's daughter, to turn up her nose at you! I would dress for none of them — a saucy set! if I were you."

Mrs. Thornton is an important character and in fact the book ends with a reference to her, no less.

What kind of coconut cakes did Dixon, Mrs. Hale's faithful maid, prepare for Mr. Thornton? I am not sure and decided not to worry too much, and focus rather on what I would make for Mr. Thornton. I imagined small, dainty cakes, something light and appropriate to eat with tea. I then remembered seeing something interesting in Haalo's blog Cook (almost) Anything at Least Once: an Australian sweet treat called friand. Haalo says:

The history of Friands is a little sketchy as they almost appear to have come from nowhere but they have won our hearts. They seem to be based on a French cake called Financier.

Haalo's recipe for Mango friands was a favorite among the ones she has presented. In it, coconut is included as flour. I also liked a slightly different version, where the friands are baked in mini-pans. I have those molds and rarely use them. In the end, I took element from both recipes, added a personal touch and came out with my version of friands for Mr. Thornton. I have never tasted a friand, so I am not sure how mine compares to what is served in Australia. Maybe I should visit again and find out. (We were there many years ago and I have fond memories of our trip, especially of our stay in Tasmania.) 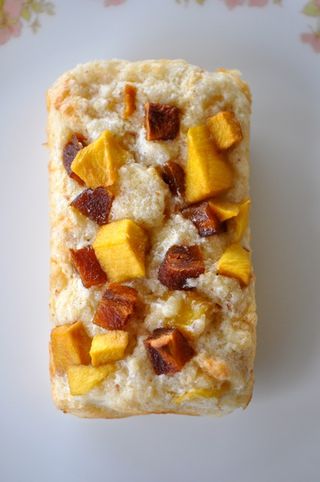 The full batch would make six cakes, but for our small household, I halved the quantities and this "reduced" recipe is what I give below.

Pre-heat the oven to 350 F. Grease three mini loaf tins (4 x 2 1/4 inch) and set aside. Alternatively, line the bottom and short sides using a strip of parchment paper and grease the long sides of each tin. Combine the dry ingredients in a mixing bowl. In a small bowl, beat egg whites until fluffy/soft peak. Pour melted butter into dry ingredients and stir to combine. Add half the mango pieces and stir to combine. Add a portion of the egg whites and fold gently, then add the rest and fold as well.

Spoon the batter into the tins. Distribute mango and apricot pieces on the surface. Put in the oven and bake 20-25 minutes or until the tops are light golden. Apply the toothpick test to make sure the friands are cooked. Remove from the oven and cool in tins for a few minutes. Gently take the cakes out of the tins and cool on a wire rack. 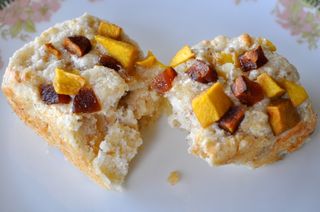 As usual, my efforts did not produce something elegant, but the friands were nice and they were much appreciated by Mr. Thornton my husband.

This is my contribution to the 15th edition of Novel Food, the literary/culinary event that Lisa of Champaign Taste and I have started some time ago.

I think they look very inviting, with the little mango and apricot cubes on top. Another novel (and movie!) to look out for. Thank you!

An intriguing recipe. I'll bet these were so good.

I love period dramas too so I will have to seek this series out. I am working on a post to send you for Novel Food so thanks for the deadline reminder.

They are indeed, Paz.

Thanks Caffettiera. Considering where you are, I assume you will not have problems getting the movie. And the book is also available online. I hope you will enjoy both.

Thank you so much, Rachel. If you like period dramas, I recommend you try North and South. I think I'll watch it again soon. I am looking forward to reading your post: thanks!

These friands look utterly tempting, I love both coconut and mango. ;-)
I recently found organic coconut shavings in a store here, I think I know what I'll do with them.

Beautiful! I love the pairing of the mango and apricot in these. What a great review. I have heard of North and South--both the DVDs and the books but I have not delved into them yet. You inspire me to get on it. ;-)

Thanks for hosting this event. I am excited to join in my first one!

Ciao Merisi. I think this is a good use for coconut as its strong flavor is tempered by the mango and the other ingredients. A nice balance.

Ciao Deb. I love dried apricots and always have some at home. I think they pair well with a lot of ingredients (I am using them also in some pumpkin scones I will share one of these days). I am so glad you joined the event: thanks!

I've read Elizabeth Gaskell's biography of Charlotte Bronte, and I am really fond of the Cranston series that was made by the BBC. In a changing Victorian society, she was a forward thinker and something of a feminist, I think. "North and South" sounds like a very interesting novel. One to add to my list of books to be read! And if I find it, I will sure buy "North and South" on DVD. All the period dramas made by the BBC are a real treat.
You made a very nice choice for Mr. Thornton's tea cakes. A light and airy batter. He'll be sure to come to your house again!

Hi Ana. We also watched the Cranford series (also Return to Cranford). If you liked those, you'll like North and South. I love what the BBC does. We have watched a lot of them and the quality is always outstanding. I am glad you like the cakes :)