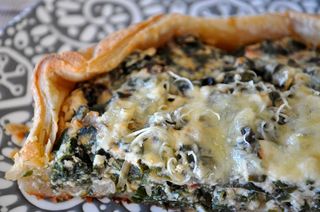 I agonized a bit over the title for this post. Marta of Mangiare è un po' come viaggiare (eating is a bit like traveling) whose post inspired me, calls it pasta sfoglia light, using the English adjective in a way that is very common in Italy to describe food items that are less caloric (usually due to a lower fat content) than their traditional counterpart (disclaimer: this is simply a linguistic explanation; I don't know how the all-butter puff pastry I make compares to the one described below in terms of calories, so I make no claims in this regard). One of the posts Marta references calls it finta sfoglia, fake puff pastry, which I don't like as it may also discourage people for giving the recipe a try. The other post referenced calls it sfoglia dei poveretti, poor people's puff pastry, a nice alliteration that has an interesting social connotation: however, it doesn't quite apply to the US, where true ricotta is very hard to find. So, I decided to use "alternative" puff pastry, meaning, it is not the traditional all-butter puff pastry, but an alternative you may choose to make.

As a child, I thought that puff pastry was magical: I mean, what makes all those layers that give the pastry the texture everybody loves? In my case, the magic was demistified a few years ago:

In July 2008, I interviewed Trace Leighton, Chef de Patisserie of Nibblers Eatery & Wine Bar, in Pleasant Hill1 for an article that was later published on Edible East Bay (you can download the pdf of "The Physicist and the Baker" from this page). The main topic of our conversation was puff pastry, and I owe to Trace the fearlessness of my first attempt at it, which was a success. Therefore, puff pastry is now part of my repertoire. A great characteristic of puff pastry is that it can be frozen and, in fact, for this recipe I used part of a batch that I had made and frozen a few weeks ago. The recipe for vol-au-vents on the Daring Bakers' site has also instructions on how to make puff pastry. [from my post on vol-au-vents]

The recipe in Marta's post caught my attention because it uses ricotta as an ingredient, together with flour and butter (farina e burro). As most of you know, I make ricotta at home fairly regularly, using the whey (siero di latte) from various cheeses I make, so ricotta is an ingredient that is readibly available to me. A portion of the first batch of ricotta that I made after reading Marta's post went into the preparation of this alternative puff pastry. The rest went into the filling of the tart I made with some of that pastry. The recipe for the tart, the first rendition of which is portrayed in the photo at the top, will be in the next post.

In the traditional puff pastry recipe, the dough contains a certain amount of water. The alternative puff pastry does not have water among its ingredients: the whey in ricotta contributes the liquid component. Thanks to Lory of La Mercante di Spezie for sharing her recipe (which uses ricotta), to Adriano of Profumo di Lievito for offering his take (which uses cream cheese instead of ricotta and lowers the amount of butter) and photos, and to Marta for her version, which combines the previous two in using ricotta as the first one and the amount of butter of the second one.

Here, I am providing the English version of Marta's recipe, plus a couple of personal notes based on my experience making it. 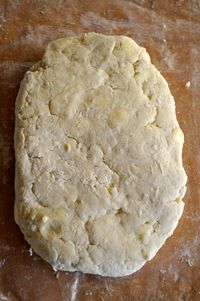 Ingredients (see the notes below):

Note #1: invest in a digital kitchen scale that has both metric and US units. I use cups and spoons, but more often than not, I weigh ingredients. And having a scale allows you to follow recipes not written for a US audience.

Note #2: the amount of whey in my homemade ricotta depends on the length of the draining period. Differently from gnocchi di ricotta, this pastry does not require a very dry ricotta, but you don't want something dripping whey. After the regular draining period, I let the unmolded ricotta sit overnight in a bowl (in the fridge) and the morning after I take my 125 g from the top layer. I also usually have a small quantity of whey at the bottom of the bowl and I remove it.

Note #3: I am not good at cutting butter into flour with anything other than my hands, so that is what I do. Some people like to grate the very cold butter using a coarse grater. I prefer cutting it into small pieces, but it is good to have options, isn't it?

Cut the butter into the flour and then add the ricotta. Make a dough, shape it into a rectangle about 1/2-inch thick (see photo above), wrap it in plastic wrap and refrigerate for one day. The dough won't be nice and homogeneous at this point and that is fine.

The following day, fold the dough. To make one fold, roll the dough in both directions into a thinner rectangle. Fold along the longer side: fold the right third towards the center, then fold the left third over it to make a letter-shaped package (see photos in this post). Wrap the folded dough again and refrigerate for half an hour or so. (If it is more, it is fine: I honestly never time part of the process.) 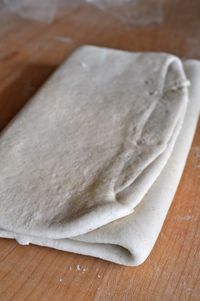 Repeat the fold twice more in the same way. In the process, you will see that the dough becomes more homogeneous and smoother. After the last fold, refrigerate again and use as you wish. (I ended up making a fourth fold, just to see what would happen.) As mentioned above, puff pasty can be frozen, which makes it a great resource to have on hand. If you roll it and then freeze it, it will take less time to thaw when you need it.

Marta halved the quantity of the ingredients used in the recipes she quotes and I followed her lead. Whenever possible, I recommend making a smaller batch of a new recipe until you become comfortable with the process, then go for the full amount. The recipe as given makes a nice amount of puff pastry to play with.

Once you have the savory puff pastry, you can make vol-au-vents, savory tarts, pizzette (my childhood's dream party food brought to life in the post referenced by Cara and Stefano of Due Spaghetti), etc.

1 The restaurant is now called The Fig Tree.

I am submitting this recipe, bookmarked on the blog Mangiare è un po' come viaggiare to the January edition of Bookmarked Recipes, an event originally started by Ruth of Ruth’s Kitchen Experiments and now hosted by Jacqueline of Tinned Tomatoes.

What a wonderful post! We are delighted to have a recipe for pasta sfoglia, and a lighter version is perfect, since it is truly a guilty pleasure. Thanks for the mention of our pizzette, too.

I agree that your title -- "alternative puff pastry" is more alluring. I'd like to try it. :-D

Thanks you, DueSpaghetti! Your post made me take a little walk down memory lane. In looking back, I think it was good that we only had pizzette at parties, so they never lost their special food aura.

Ciao Paz. The process is really easy, and fun.

Just love the idea of this pastry and can't wait to try it.

Now -this- is a dish I can get behind. It looks great!

I hope you do, Haalo.

I love puff pastry but its so hard to get it fluffy and light as seen in the bakeries in India :-(

Hi Sajida. Puff pastry requires a bit of time to make, but almost all of it is resting in the fridge. Once you find a recipe that you like, you'll learn how long it takes and then you can plan so you have the puff pastry ready when you need to use it. It also freezes well.