Che cosa ti ha portato Babbo Natale? (what did Santa bring you?) is the question often asked this time of the year. In the past, I had expressed the wish to have a magic wand. This year, Santa brought me one: Babbo Natale mi ha portato una bacchetta magica. 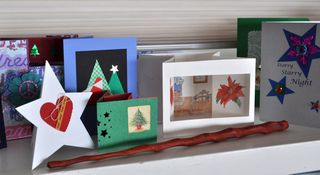 Here it is, resting next to some of the cards (biglietti) I received as part of the North Redwoods Book Arts Guild Holiday card exchange (this photo album shows them all). They are all beautiful and they make up this year Holiday decor at our house. 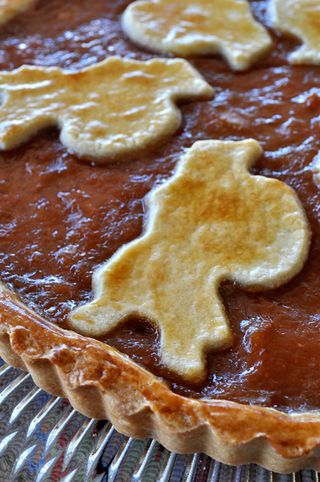 On Christmas Eve (vigilia di Natale) I made a crostata with apple, rhubarb and strawberry preserves (conserva di mele, rabarbaro e fragole) and decorated the surface with Babbo Natale shapes (instead of the traditional lattice).

Speaking of Babbo Natale, don't you think he could live in this pretty house? 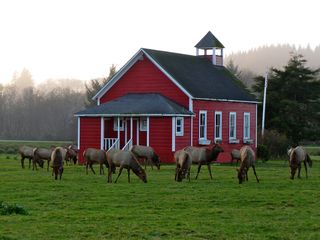 I know, those are not reindeer (renne), but elk (wapiti), there is no snow (neve), and the house is actually the Little Red Schoolhouse in Stone Lagoon, CA. But still, I like to think that Santa would enjoy living here. (The Roosevelt Elk are free to roam and they do, often crossing Hwy 101, which runs nearby.)

In case you are wondering, I am still getting acquainted with my magic wand.

Yes, I think Santa would love that house!

A perfect little red house for Santa:) May the New Year be the most brightest! With best wishes to you and your family!!!((♥))"

I am glad you agree with me, Paz.

Thanks Ivy. Same to you and your family.