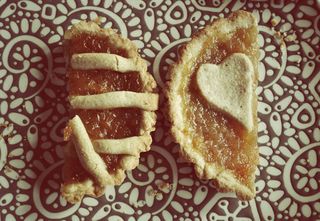 Recently, my husband and I watched on DVD the Maigret movies from the early '90s starring Michael Gambon and enjoyed them a lot. Chief Inspector Maigret is the protagonist of many novels and stories by Belgian-French writer Georges Simenon. When I was a kid, il commissario Maigret was popular in Italy thanks to the TV movies starring Gino Cervi.

I had read only one of the Maigret novels, so during a recent visit to a bookstore, I decided to correct that, but got attracted by one of Simenon's novels without Maigret: La chambre bleue, from 1964 (in Italian La camera azzurra and in English The Blue Room).

Tony and Andrée have had a relation for 11 months, during which they have met eight times in the blue room of the hotel owned by Tony's brother. Tony is married to Gisèle and they have a daughter, Marianne. Andrée is married to Nicolas. The novel opens in the blue room, at the end of what will turn out to be the last meeting of the two lovers. The novel then moves to some time after that event and we understand that Tony is in jail. However, it is not immediately clear of what crime he is accused. As Tony answers questions and remembers past events, the story of the intervening months is revealed.

Tony's story brings the reader into a quiet corner of France, where life goes on fairly steadily, but where nothing goes on unremarked (as Tony will find out). It's difficult for me to say more without spoiling the pleasure of reading the novel. I found every element of it interesting: the story itself, the way it is told, the characters and how they are portrayed, the ending. 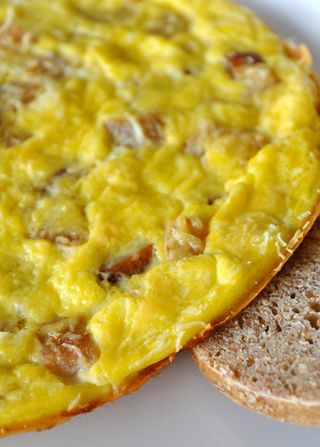 One important element of the story is the contrast between Gisèle and Andrée. Tony's life with his wife is quiet and follows a certain routine, partly dictated by their daughter's needs and partly by his work schedule. Here's the sentence that inspired the first dish:

They had sat down to dinner as usual: soup, a ham omelette, salad, a camembert, and, for dessert, apricots.

I wish I could tell you about making camembert at home. I have actually done it earlier this year, and the result was positive, but I have no photographic proof, and for various reasons I have not repeated the experience. Aging requirements would not allow me to have a homemade camembert ready in time, so I focused on the ham omelette: in the Italian version of the book, which is the one I read, it is frittata col prosciutto. This is a dish that would be quite easy to make in Italy, but where I am, it is a different story. Still, I was set on making a frittata, and if this were apricot season I would have tried to make a roasted apricot frttata on the same line of my roasted peach frittata. Alas, summer is over, so there are no fresh apricots (albicocche) around, but there are beautiful local Asian pears and so my inspiration produced a roasted Asian pear frittata.

Another passage of the book inspired me to prepare something else. In the story, fruit preserves play an important role. The first mention is not particularly remarkable:

Marianne only liked strawberry jam, whereas her mother, who was allergic to strawberries — even in jam they gave her a rash — preferred plum jelly. In the early days of their marriage, he had teased Gisele about her taste in food, which often made him smile. 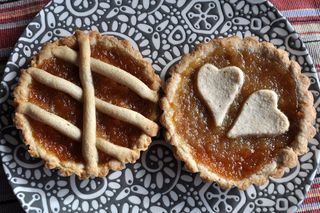 But later, Gisèle's preference becomes a pivotal element of the story.

A few days ago, I made a crostata (tart) with a layer of strawberry and rhubarb preserves and over it a layer of fresh apples. Gisèle could not have eaten it, due to her allergy. I did not make any plum preserves last summer, but I still could not let go of the idea of making something related to that sentence, something with fruit preserves.

I had never made tartlets before, so I decided to do that: the filling for the one on the left is my apple and mango preserves and for the one on the right is my Asian pear butter (burro di pere asiatiche) flavored with some fresh ginger (zenzero). After making a somewhat traditional lattice for one crostatina, I decided to hint more directly at the story that had inspired me and reached for the small heart-shaped cookie cutter. I did not glaze the pasta frolla, so the two hearts (cuori) are a bit pale.

Gisèle is the character that interested me the most. Did she know or suspect what was going on between Tony and Andrée? Was she ever worried or afraid?

Because of her golden hair, her pale skin and oval face, people frequently remarked that she had an angelic look. But she only liked pungent foods: pickled herrings, salads flavored with garlic and liberally dressed with vinegar, and strong cheeses. Often she would be chewing at a large raw onion as she worked in the vegetable garden. On the other hand, she never touched sweets or pastries. He was the one with the sweet tooth. This was not the only anomaly in their domestic life...

Given her preferences, it's unlikely that Gisèle would have tasted my tartlets, though maybe the ginger-flavored pear butter would have convinced her to try. On the other hand, I think that Tony and Andrée would have liked them.

Between the photo at the bottom and the one at the top, my husband's tasting occurred. He liked the crostatina with Asian pear butter better. When I saw the two half crostatine on the plate, I thought they were an apt metaphor for the lonely halves in the story, whose leitmotif is the inability to communicate. This inability, which we see in every character, not just the main ones, has tragic consequences.

1 To keep the post within a reasonable length, I am making an exception to my usual blog format and give the recipes on a separate page.

This is my second contribution to the 14th edition of Novel Food, the literary/culinary event that Lisa of Champaign Taste and I have started some time ago (this time I am hosting solo as Lisa is taking a break from blogging).

I have a friend who sounds a bit like Gisele - she looks very delicate, but likes strong, vinegary foods. The resemblance ends there, however, because she has a definite sweet tooth. She'd make quick work of those tartlets!

I love your roasted Asian pear frittata & tartlets. I especially love the tartlet with the hearts. Love it.

Ciao Adele. I wish I could tell you that I will give you the recipe of the pear butter, but I didn't write down what I did. I used fresh ginger, grated and you want to taste to avoid overpowering the pear flavor. I used no other spice.

Ciao Paz. I make frittata often and like to try new takes on this classic. And I also like to vary the traditional lattice decoration on crostata: I am glad you like the little hearts.

Oh, Simone, your crostatas are so tempting! The apple and mango preserves and the Asian pear butter with ginger sounds great! The flavors must very interesting. The Asian pear is what I find interesting the most as I have never eaten it (not sold around here) and the heart decoration is lovely :)

I enjoyed the Michael Gambon series of Maigret but I'm afraid that I'm old enough to remember an earlier tv series of Maigret from the 1960s starring Rupert Davies. I couldn't quite believe the Gambon character because Rupert Davies was (and still is) Maigret for me. Such is the power of things you see and read when you're around the age of 9 or 10. Anyway, I love the flavours you've used in those tartlets.

Ciao Catalina. I hope Asian pears become available in your area. They have a particular texture and flavor and they are also pretty. But you can make pear butter with regular pears. Apple and pear butter is something I encountered years ago when visiting New England in the fall and I like to make them. I actually have a good quantity of apples gifted to me, so I will be making some soon.

Hi Phil. I read about the series you mentioned. During the same period, Gino Cervi was the Italian Maigret. I must look around for the DVDs now: you made me very curious to see the difference. I have seen many movies starring Gambon and really liked him. Most recently, we watched Longitude, where my other favorite, Jeremy Irons, also stars.