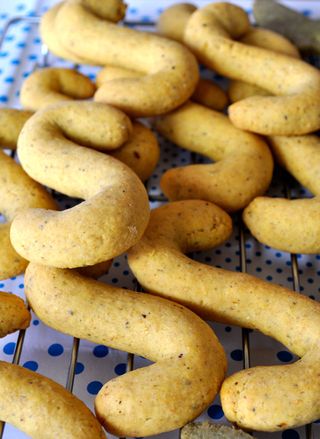 Italian biscuits, recipe from "The Cookiepedia" by Stacy Adimando

With a title like The Cookiepedia this book intrigued me all'istante (instantly). Once I had it in my hands, I found a number of things to like about it: 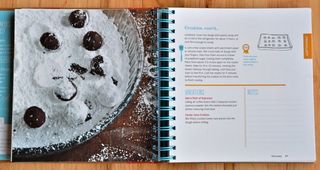 Most important in the list of things I like about the book is that I have made five recipes from the book and they all turned out very well:

In all the cases, I halved the quantities and used some whole-wheat flour instead of white flour. In making salt-and-pepper cookies, I used flax meal and water as egg substitute, something that I had been meaning to try for a while: the substitution was fine.

As I write, I have made the Italian biscuits three times and the dried-fruit cookies twice. When I mentioned homemade cookies brought with us during a recent trip, I was referring to those two kinds. And I served the salt-and-pepper cookies with a soup that will be featured soon.

To see the first 16 pages of the book, go to this page and click on the link View interior spread. I have received permission to share one of the recipes I made: Dried-Fruit Cookies [pdf]. These soft morsels can be made with various types of dried fruit or a mix. I had flame raisins from the farmers market and that is what I used. I varied the recipe a bit by loweing the amount of sugar and increasing the amount of dried fruit (the latter move was unintentional, but it worked). 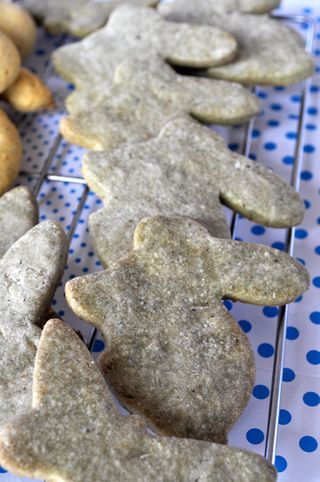 The language corner. The word cookie is actually difficult to translate into Italian and the Italian word biscotto is difficult to translate into English, though the dictionary tells you that their meaning is the same. As I have explained in this post, the difficulty lies in the evolution of the word biscotto in Italian and its adherence to the original meaning in the name of the baked product sold in the US (also featured in The Cookiepedia).

It doesn't help to clarify the matter the fact that it is difficult to find Italian biscotti in US stores and that their consumption is a totally Italian thing. In one of the recipes I tried, Ms Adimando uses the word biscuit in the British English sense, more similar to the Italian biscotto.

As I said, it's complicated. If I were to translate the book into Italian, I would probably title it something like enciclopedia di biscotti e pasticcini.

FTC disclosure: I have requested a review copy of the book mentioned in this post from the publisher and received it free of charge. I have not and will not receive any monetary compensation for discussing the book on my blog. The views expressed in the post are my own.

Wow, the Italian biscuits at the top look so much like the cookies that my grandmother used to make… so wonderful dunked in coffee! Brings back fond memories….

You are right, biscotti are something so Italian. It is bizarre that such a large part of Italian food culture, which is otherwise so well known, is totally ignored abroad. Is it because it is such a family, everyday food? Anyway, I wish I had had this book when I was making huge tins of biscotti for Christmas, as a teenager.

Those Italian Biscuits and their "S" shape immediately caught my eye, and I am *very* intrigued by the Salt and Pepper ones. Looks like a very baker-friendly and sweet cookbook with recipes that work. Thanks for sharing the treats, Simona.

Oh my! This book looks like it's just for me! ;-) I love the cookies that you've showcased here. They all look delish. Just the other day, I was eyeballing the remaining buckwheat flour and thinking of making cookies. Will be making them very soon.

I am not surprised, Frank. And I am glad you know about dunking biscotti: it's such a basic, simple pleasure!

Ciao Caffettiera. I have been wondering about it myself. I think that part of the reason is that biscotti are mainly a breakfast item for us and breakfast here has a deep and very different tradition. Italian children grow up dunking biscotti in their caffelatte, so they acquire a strong relation with them.