When you see beautiful bunches of rainbow chard like the ones in the photo, what is a farmers' market shopper to do? 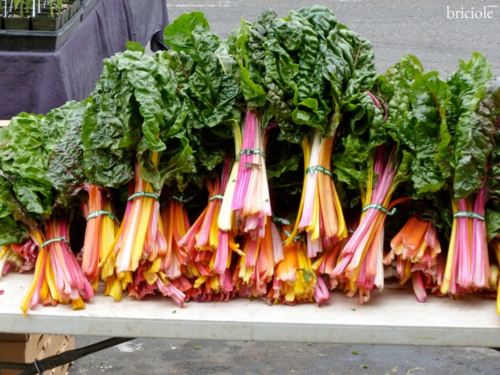 rainbow chard at the farmers' market

I brought home one and used the leaves to prepare a very personal adaptation of the Cottage Cheese and Spinach Gratin recipe from Vegetarian Cooking for Everyone by Deborah Madison, using rainbow chard leaves instead of spinach and my homemade chèvre instead of cottage cheese (I also halved the quantity of cheese). I have done this several times, so I know that, as a result, I have a bunch of colorful rainbow chard stalks, which I like a lot.

The Italian word for chard is bietola also called bieta (sometimes the plural bietole is used). My mother used to boil chard (leaves and stalks) and then serve it in insalata, i.e., at room temperature, seasoned with olive oil and lemon juice, or ripassata, i.e., warmed up in a frying pan with garlic and olive oil. When I moved to Milan, I ate coste for this first time, that is, chard stalks served by themselves. I have never seen rainbow chard in Italy, so the coste are white. As an final language note, in northern Italy, coste is sometimes used to indicate whole chard (leaves and stalks).

With the coste colorate (colorful chard stalks) that I get after preparing the leaves for the dish mentioned above I prepare a minimalist dish au gratin. First, I trim the stalks and cut them into 1 to 2 inch pieces. I then steam them. I usually do this in advance. Close to dinner time, I season the chard stalks with salt, a sprinkle of freshly ground black pepper and a bit of olive oil, the spread them in my 8" square cake pan or 9" pyrex pie plate to form an even layer half an inch thick. I then sprinkle the surface with freshly grated cheese (formaggio grattugiato). 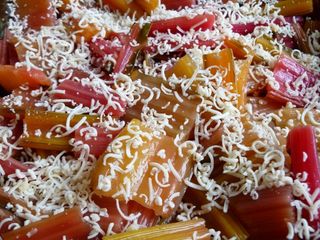 As some of you know, I make cheese at home, so I adapt recipes to use my own cheese. In the case shown above, the cheese was a Stirred-Curd Cheddar.  I then put the pan in a 400 F oven until everything is warm and the cheese melted. I don't have a nice photo of the finished dish. I actually don't think it is particularly photogenic. However, I like it a lot.

Cooking chard stalks always reminds me of my country of origin, and in particular of my move to Milan. In the first few months I lived there, there were several hilarious episodes of bewilderment, due to the fact that I was not familiar with certain foods, while others were referred to with names different from the ones I was familiar with (I grew up in Perugia). As mentioned above, coste represent an example of the first case, and so do cavolini di Bruxelles (Brussels sprouts), while fagiolini (snap beans), which are called cornetti in Milan, the name I had until then used to refer to croissants, represent and example of the second case.

Final note: I have prepared red beet stalks in the same way and liked the result. Even in the recipes where both beet leaves and roots are used, the stalks are overlooked. Not by me!

This is my contribution to a challenge that Val of More Than Burnt Toast launched in preparation of the release of the movie based on the novel Eat, Pray, Love by Elizabeth Gilbert. I read the novel three years ago and really enjoyed it, particularly the Eat section, which talks about Gilbert's experience in Italy. I have explained why I liked what she wrote about my country of origin in this post.

Very interesting Simona. I didn't know that you can cook the stalks on their own. Must try this next time I get chard.

Thank you for bringing this colourful and tasty contorno dish to our Eat, Pray, Love challenge Simona. I also didn't think to eat the stalks of the chard but I will watch for them the next time I am at the farmers market.

I tried that stalks when I was in Italy. I was so surprised in the unexplainable taste of it. It is so delicious. I am wanted to try it again but I can’t find it in our place.

A beautiful way to use a so often overlooked part of chard.

Ciao Ivy. I am glad I showed something that is not very well known. I hope you try it.

You are welcome, Val. It was my pleasure.