When the movie Come l'acqua per il cioccolato came out, I watched it and enjoyed it. I then read the book (in Italian translation) and liked it. So, when I saw that Like Water for Chocolate, by Laura Esquivel, was the Cook the Books Club selection, I was glad to be offered a reason to read again the novel. While re-reading meant enjoying again certain parts of the book, I must admit that others elicited a different reaction. For example, the only thing I could see of Pedro was his selfishness. And I got a bit impatient with Tita for not seeing him the same way I did.

When I first read the book, I was not into cooking, so I viewed the recipes only as a literary device. This time, I was more sensitive to how skillfully they are woven into the narrative: "for Tita the joy of living was wrapped up in the delights of food." Much as I admire the recipes in their context, though, I had a hard time fitting them into my kitchen and my personal taste. So I decided I would prepare a Mexican-style bean dish, since I like beans and "Putting the beans on to cook was the first thing Tita did when she got up at five in the morning." But no recipe I looked at caught my eye.

What did catch my eye last fall were these organic, locally grown Flor de Mayo beans: aren't they pretty? 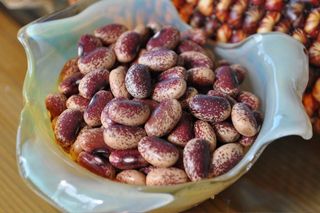 I saw a recipe that intrigued me in my beloved Vegetarian Cooking for Everyone, by Deborah Madison: Black Bean Cakes. I know that Flor de Mayo beans are not the same as black beans, but that did not prevent me from wanting to use the pretty beans to make bean cakes. I realized that, at this point, I was quite removed from the book and its atmosphere, but what could I do? That's where inspiration had brought me.

I soaked half a cup of beans and then cooked them as I usually do (with onion, garlic, parsley and bay leaf as aromatics, based on the recipe Beans with Aromatics from the same cookbook). I mashed the cooled beans with a potato masher, then added ground cumin (cumino) to taste1. I substituted smoked cheese with my homemade Cantal cheese (3 tablespoons) and lime juice with lemon juice (to taste). I then added 2 tablespoons of chopped parsley (prezzemolo, from my little herb garden) instead of cilantro (coriandolo fresco), which to my husband's palate tastes metallic. At this point, the bean mixture needed to rest at least 15 minutes in the fridge, and I realized that I was running out of time for dinner, so I put the mashed, seasoned beans in the fridge and cooked the cakes the following day for lunch.

Of course, by now I am two days away from the deadline, so I don't have much room for making mistakes, which, in my experience, means that the worst case scenario will occur. It did occur, and resulted in the loss of three bean cakes. I will spare you the details of the disaster. Fortunately, I had two more cakes, which I was able to fry (after dusting them with cornmeal)2 and place on my husband's lunch plate (on the right in the photo below), together with two mystery patties (their identity will be revealed in a future post) and some roasted butternut squash. All the components of the plate were received well. 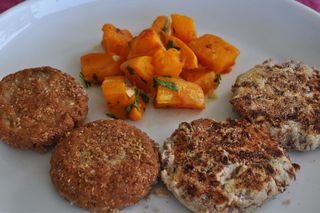 Disaster claimed my portion of the bean cakes I made, and I am left with the feeling that some sort of spell was cast on me to punish me for reacting differently to some aspects of the novel this time around.

I bought my copy of Like Water for Chocolate used. One thing I like about buying used books is finding handwritten notes in them. On page 5, over the word "preparation" (of Christmas Rolls) I can read: "This Book Sure is neat." How's that for a closing note?

1 The original recipe uses black beans seasoned with chipotle and tomatoes (from the preceding page) as base for the cakes, but it gives the option of using basic beans instead, in which case it suggests to add more seasoning (like paprika or mild red chile). I will try this the next time I make the bean cakes (probably adding paprika to half the mixture to make a comparison).
2 I pan-fried the polpette di fagioli in olive oil, turning them after 8 minutes, when a crust had formed, and allowing the same cooking time to the other side.

Finally, here is a roundup of the event.

This is an intriguing recipe. And I agree with you about Pedro being rather insipid. Tita could've hankered after someone much more worthy of her many talents and charms.

Mmm, true to the novel or not, your bean cakes sound (and look) delicious. Those really are beautiful beans. Seeing them is making me anxious for our farmers' market to start so that I can buy some local beans again.

It's been so long since I read that book that I don't remember the details of the story well, but I do remember enjoying it. I still have it, so I may reread it sometime soon.

These beans patties sound delicious. I've made bean patties before but I am definitely going to try them with the Greek giant black beans as well.

I like your inspiration! ;-) The bean cakes look delicious and those beans are just gorgeous--I love all that speckling on them. Thanks for joining in this round of CTB. Your Pedro comments were right on with the rest of the group's! ;-)

Ciao Rachel. I guess this time I did not buy the idea of "marrying your sister to be near you." Both Pedro and Tita's mother are people who take and Tita is the giver.

Ciao Lisa. Our farmers' market is starting this Saturday and I can't wait, even though I know that at the beginning it won't be as rich in offering as it was at the end of the season. But I love going there, seeing people, talking to the farmers: the whole ritual.

And I need to find the Greek giant black beans that I have seen on your blog, Ivy: they look beautiful.

Ciao Deb. It was the speckling that attracted me. I know, Pedro did not are well with our group. But I am glad I read the novel again: it made me think about the different reaction I had this time and the possible reasons behind it.

I don't think I've ever made bean cakes, but since I'm wanting to have more meatless meals, that's a great idea.

You make me want to read the book AND taste your bean cakes. ;-)

Simona,
those bean cakes sound delicious, even though - or because? - they are twice removed, so to speak, just like some of our favorite relatives, whom we happen to love more than some of those closer to us. Sometimes, at least. *smile*

I remember reading that book and being upset about Pedro's ways. I saw the movie when it came out, and enjoyed it more, I loved the visual feast aspect, but I don't even remember anymore what destiny the two lovers suffered.

I empathize with your husband's dislike for fresh coriander, I happened to feel the same metallic sensation when I first came upon that herb as a teenager. Later, I literally fell for it, hook, line and sinker. Should you ever go to Washington DC, there's a tea house there, Teaism, the original one on R Street NW, near the Dupont Circle Metro Station. Besides the fantastic selection of teas (and they brew it right!), their food is extraordinary, my favorite being the Cilantro Scrambled Eggs with Tea Cured Salmon, a Naan bread - made fresh in their Tandoori oven - on the side. Their ginger scones taste heavenly too.
Here's their menu :http://www.teaism.com/Restaurant/DupontCircleMenu8.html,
here their website:
http://www.teaism.com/Restaurant/DupontCircle8.html
When I get homesick, I make myself the coriander scrambled eggs on weekends.

Thank you for always writing such excellent articles. I hope that one day you will be able to publish them in a book.
Book with a CD to listen to while preparing your meals.

Interesting recipe. I've never seen bean cakes before (I myself had made potato and bean cakes that were pretty tasty), but they look really good. I must try them! And Tita frustrates me. Maybe I am just not a romantic, but waiting that long for somebody so selfish is dumb, I think. hehe.

Your mystery patties are much tidier - I look forward to finding out what they are! I'm sort of hoping for tuna. I love tuna polpettine! I loved the image of putting the beans on to cook first thing in the morning, but I found the book so frustrating!

They are both interesting, in different ways, Paz.

Ciao Merisi. When I took up the book for the second time, I did remember the ending, not so much from the first reading, but from the movie. I have wondered whether my different reaction to the story had to do with being older (not sure about wiser). Thank you so much for the pointer to Teaism. I may go to DC in November and if I do, I will certainly visit the place. I cannot forget my first visit to that area: it was a Sunday and there was the farmers' market. Thanks for the kind words and the encouragement :) Buona Pasqua anche a te.

Hi Ben and thanks for the kind words. Tita should have married the doctor, right?

Ciao Alicia. Indeed, they are much tidier. I feel bad about dashing your hopes: they are not tuna polpettine, though now that you mention them, they sound interesting: I should look into making them. The routine of Tita's kitchen is fascinating, so different from the routine of my kitchen or my mother's.

Those beans are gorgeous! Such a pretty color. And the patties you made sound as if they are bursting with flavor. I love that you served them with butternut squash.

I was irritated with characters in the book as well. Pedro is such an obnoxious guy!

Ciao Joanne. I am glad you like the beans. I have a weakness for butternut squash: I could eat some every day and not get tired. It seems like Pedro managed to irritate most of us. I wonder what Ms. Esquivel's feelings for him were and are.