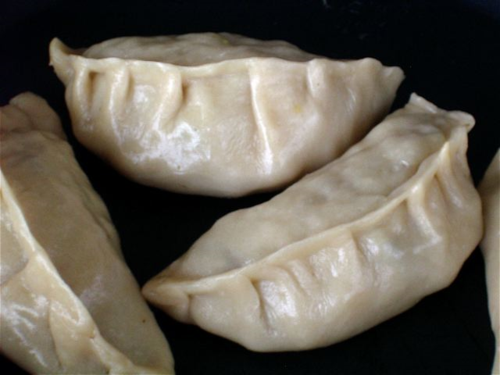 For the second Daring Cooks challenge, Jen from use real butter chose Chinese dumplings / potstickers. You can find the recipe for the dumpling dough, two fillings and dipping sauce, plus instructions on preparing, assembling and cooking the dumplings here. Jen shared with us also a post she wrote that contains step-by-step instructions with beautiful photographs.

I usually know better than wait until the night before the reveal date to do the challenge, but sometimes one can't help it and this was just one such case. Therefore I was a bit nervous: I knew I would not have time to redo the recipe, if anything went wrong.

For the filling, I decided to improvise on a vegetarian theme. I oiled a warmed up frying pan, then added a minced shallot (scalogno) and a couple of garlic cloves (spicchi d'aglio), the latter worked into a paste with half a teaspoon of sea salt. After a few minutes, I added half of a green cabbage head, sliced into thin ribbons and the ribbons chopped into pieces. Then I added a shredded carrot and finally, four large white mushrooms, chopped into rather small pieces. The small dimensions of all the prepared ingredients were in response to Jen's recommendation to avoid large pieces in the filling that would stick out and possibly pierce the dumpling skin.

When all the vegetables were warm and had started to soften, I added a good splash of white wine (vino bianco) and then let them cook until soft, stirring often. Towards the end, I added some turmeric (curcuma) and stirred, then half a cup of blanched and shelled small fava beans (fave). When I turned off the heat, I adjusted the salt and freshly ground black pepper. 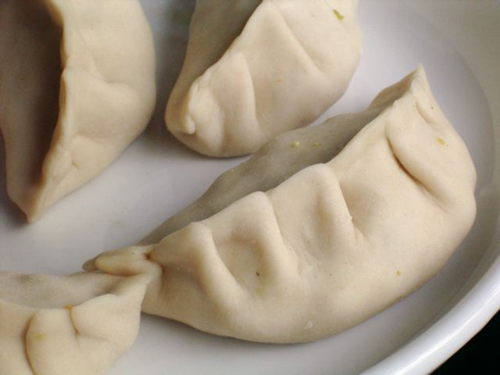 I made the dough as directed, adding a bit more water to get the right consistency. Rolling the dumpling skins was a lot of fun. After the first few, I developed a sort of personal routine. I ended up cutting the pieces of dough bigger than specified, so my ravioli were rather oversize. I will do better next time. The folding and pleating was also fun and I was pretty proud of the look of my first batch. Will you believe me when I say that, as I was making the dumplings, I was also getting ready to cook a batch of gnocchi di ricotta that I had made earlier in the day?

After using half the dough, I decided to cook the dumplings and then make the other half for freezing. I chose the pan frying option and had fun watching the water sizzle and the dumplings change color under the transparent lid. I was starting to relax, as everything was going well, when I realized that, contrary to what I believed, I didn't have any chopsticks. We used our hands instead, which, considering the size of the dumplings, were probably a better option anyway.

I served my ravioli cinesi with straight soy sauce and the gnocchi di ricotta with some garlic scape pesto I had made in the morning. My husband loved both. My dumplings were "different" from others he had had before. After the first, introductory one, he had a few more. I thought that the skin could have been thinner, so in the second batch I made after dinner, which is now in the freezer, I tried to roll the dough a bit more.

By the time I served dinner, it was getting late on a gray day, so the light was not conducive to a good photo. I hope I'll be able to get a better shot when I cook the ravioli cinesi I froze. I am sure you will find a lot of photographs to admire, portraying the beautiful creations of my fellow Daring Cooks. A special thanks to Jen for a fun and, for me, culturally fascinating challenge.

What a lovely post. Your dumplings look like they were made by a pro. It was a fun challenge. I hope you have a good day.

Beautiful job on the dumplings! They came out perfecto and look like they came from a high end asian restaurant!

Your dumplings are so cute! They look perfect. You had a lot going on there, what with gnocchi, too?! Wow. And garlic scape pesto -- yum.

You shaped them beautifully, Siomona!

Those words are so beautiful and sound softer than the English versions.
Your dumplings/ravioli are lovely. The cabbage and fava bean and mushroom filling is a wonderful one to use with these!

Great job, Simona! And thanks for visiting my site too! I agree - I should've made the wrappers a bit more thin. I may do another round tonight and try rolling them even more.
http://mickeydculinaryadventures.blogspot.com/

Such pretty potstickers you made. I love the look of them! Great job on the challenge this month. Looking forward to seeing more of your challenges in the future :)

Thanks Mary. It was a pleasant surprise that I was able to make them look nice.

Thanks Lisa. I must say I was pretty proud of myself for the result of my first try.

Ciao Lisa. I would not recommend to follow my example. I was a bit stressed out. The garlic scape was amazing: bright green, delicate in flavor and yet distinctly garlicky. Too bad scape season is over.

Hi Elle. I liked the filling and ate the leftover as a side dish the following night. Not traditional, but it worked.

They are Ivy and I recommend them, as they are also fun to make.

Hi Kenna, my pleasure. I will certainly make them again and need to cut smaller pieces of dough, so the dumplings are smaller.

Dear Jen, it was a great challenge and your detailed instructions and photos were perfect. Thanks again.

Hi Lori Lynn. I liked it: one of these spur of the moment combinations that magically works.

Your pot stickers are perfect looking, Simona - such precise pleating. I once watched a dumpling maker in a Chinatown shop window work his magic. I was completely fascinated...and intimidated. Your post gives me courage to try my own.

I was also a bit intimidated, but then things just flowed nicely, thanks to Jen's photos. I am sure you'll find that, once you get the rhythm of it, it is not as difficult a process as it may seem. As you know, I am not particularly skilled and yet I did quite well, considering that it was my first time. I do hope you try.