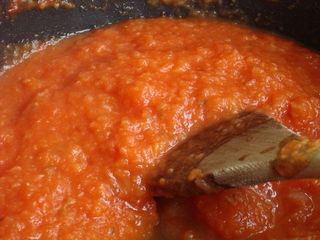 I recently talked about a tomato sauce I made for lasagne. That day, I had my hands full between making pasta, making the two sauces, assembling and baking the whole thing, so I used a can of organic diced tomatoes. I then made lasagne verdi again for Easter lunch, but split the activities between Saturday and Sunday, so I had time to make sugo di pomodoro using fresh tomatoes. I am aware that tomatoes are not yet in season where I live, but I had another reason for preparing sugo from scratch (more on this shortly) and the Roma tomatoes at the local stores looked appealing enough for the task at hand.

In the book Kitchen Confidential, there is a chapter titled "Pinot Noir: Tuscan Interlude," where author Anthony Bourdain writes:

Remember, I was not a fan of Italian food. But when I arrived that first day at Le Madri, saw that the walk-ins where absolutely empty, saw how tomato sauce, chicken stock, pasta, bread — in short everything — was made fresh (the tomato sauce from fresh, seeded, peeled tomatoes). I was stunned.

Reading this paragraph made me smile, because I grew up eating tomato sauce made from fresh seeded, peeled tomatoes — when tomatoes were in season. I thought it was normal, together with the pasta it accompanied. A few paragraphs later, Bourdain writes:

Pasta was cooked the right way, Meaning, the penne, for instance, after saucing, stood up on the plate in a mound, rather than sliding around on the plate or being left to drown in a bowl.

"You want to taste the pasta," explained Gianni, "not just the sauce." It was, I must admit, a revelation. A simple pasta pomodoro — just about the simplest thing I could think of, pasta in red sauce — suddenly became a thing of real beauty and excitement.

I don't really have a recipe for sugo di pomodoro, but more like an overall idea that I adjust to the intended use and mood of the day. This time, I started with about two pounds of pomodori (tomatoes). I brought a pot of water to the boil and blanched the tomatoes for about 10 seconds, after cutting an X at their bottom, which makes it easy to pull the skin after the tomatoes are cooled in a cold water bath. I then cut open each tomato, removed the seeds, and finally chopped it. My mother would use a food mill to purée the tomatoes. I don't have one, so I use the immersion blender later. 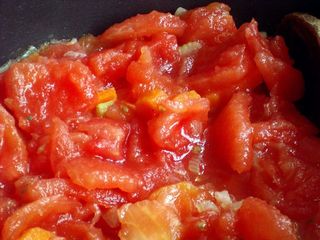 In a saucepan, I warmed up some olive oil, then added to it a good-sized shallot, minced. After a couple of minutes I added a small carrot and a small rib of celery, all finely chopped, and the leaves of a couple of sprigs of thyme, which I have growing in my little herb garden.

Before I move on, here is another excerpt from Kitchen Confidential, this one from the chapter titled "How to Cook Like the Pros":

Shallots are one of the things... that make restaurant food taste different from your food... You should always have some around for sauces, dressings and sauté items.

I am a big fan of shallots and use them a lot, so it was nice to read Bourdain's words. Back to the task at hand, I let the vegetables cook for a few minutes, then added the chopped tomatoes and cooked for 25 minutes, maintaining a nice simmer. The amount of time that I keep the lid off the saucepan depends on the amount of water in the tomatoes. When the sauce was cooked, I used the immersion blender to purée it. Finally, I adjusted the salt and set the sugo aside until it was time to assemble the lasagne.

For the Easter rendition of lasagne1, besides the fresh tomato sauce, I made béchamel sauce (using non-fat milk) and for cheese I grated some Monterey Jack of my making, aged 2.5 months. I was a bit worried about this cheese, because I had a mishap when making it, but its sharp flavor and its texture made it a nice grating cheese, which was my goal. I cannot describe my lasagne as "a thing of real beauty." Like everything I make, it was an experiment, an exploration. But it made a good meal.

This is my contribution to the third edition of Cook the Books, hosted by Jo from Food Junkie not Junk Food. You can find the guidelines for participating in the event here, and here is the announcement of the current edition.

My contribution to the second edition was qualcosa da spalmare sul pane (a spread).

1 If you follow the link to me previous post, you will find there a link to the recipes for the different elements of the lasagne, dish that was the March Daring Bakers challenge.

Hi Simona!
I definitely remember I was waiting for the recipe of your mom`s homemade tomato sauce..is this it..?The one she bottles up?
Sounds lovely! You mentioned a foodmill-do you mean the hand one with the handle that turned manually?
I do agree that the right pure tomato sauce can be a cause of great excitement..!
Believe it or not..when I was in Jordan now..the sight and taste of a Genuine old-fashioned tomato bursting with flavor and color was so appealing,that I immediatly kept some of its seeds to dry and plant as soon as I find my home! :)

Love Mr. Bourdain! And he's right about shallots, I think.
You have given me the inspiration to make fresh tomato sauce Simona. I will be trying it in the next few months.
LL

Hi Mia. No, this is not what my mother bottles up. The last time I talked to my mother we discussed other things, but don't worry, I will ask her and then let you know. This page has a photo of a food mill: http://en.wikipedia.org/wiki/Food_mill I hope you get to plant your seeds and get to harvest some nice tomatoes.

i will keep this recipe in my mind for when we get fresh tomatoes in our garden. thank you.

I hope you get a nice harvest, Bee.

Home made tomato sauce is one of the best things in life! Good luck!

I love the sound of your tomato sauce. I was also amused at the amazement of Tony at a place that makes everything from scratch. Silly me - that was what I thought happened in restaurant kitchens!

i'm very much 'cook from scratch' chef myself - i make a lot of this tomato sauce in summer (we have a thriving garden) and it lasts me all winter!

I thought the Italian dishes from that section of the book were just about the most appetising things he referred to! Your sugo looks so good - we've got some plum tomatoes growing in the garden this year and I am HOPING they ripen enough for me to make jars and jars of sauce!

Fresh tomato sauce *is* extraordinary. Can't wait until I have a garden of my own again. San Marzano seeds will be my very first purchase.

I agree, Jo. Thanks!

Lucky you, Maria. Where I live, the only way to get tomatoes to ripen would be in a hothouse.

I wish you the best of luck with your garden and your harvest, Foodycat.