You will not find ciofeca in an Italian-English dictionary. It is a dialectal word that originally denotes bad coffee. I grew up hearing it, as my mother would use it to describe a coffee that she did not like: questo caffè è una ciofeca (meaning, this coffee is really bad). By extension, ciofeca is used to describe something disgusting.

I am usually careful before trying a new recipe (Do the ingredients feel right? Does the execution make sense?). First of all, I hate failure and, second, I hate even more to throw away food. I was taught that food is not something that you waste, ever — unless, of course, it is inedible. So, the strategy is to avoid putting myself in the position of producing something inedible. Sometimes, though, good intentions are not enough.

I have recently written about a lovely musical I saw in San Francisco, High Spirits, based on a play by Noel Coward (Blithe Spirit). At some point, Madame Arcati (the medium) sings "Something is Coming to Tea" and the song mentions crumpets. My dictionary translates crumpet as focaccina da tè. That very morning I had seen an inviting recipe for crumpets in a book. It was a sign: I had to make focaccine da tè. Thanks to my dear friend Alice, I actually own a set of rings, implements necessary to make crumpets. 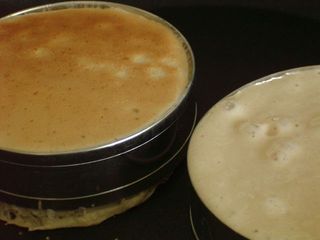 I followed the recipe and everything went smoothly until it was time to cook the crumpets. I don't have a griddle, so I used a thick-bottomed non-stick frying pan. I oiled the pan and the inside of the first ring, and poured batter (pastella) in it until just below the top rim, as directed. There was no escaping of the batter from under the ring, and the holes on the surface appeared as expected. I was starting to feel good about the experiment. With a spatula, I flipped over the crumpet — "ring and all" — and cooked the other side.

The photo above shows a bit of spill under the ring, which occurred when I flipped the crumpet, because the top was still quite runny. I didn't like it, but I was still not overly worried. A clearer sign that things were not all going well appeared when I tried to free the cooked crumpet from the ring: next time I will oil it more, I said to myself. I was a bit concerned about the status of the inside, as the crumpet was relatively thick, concern that precipitated into dismay, when the knife revealed the severely undercooked inside. 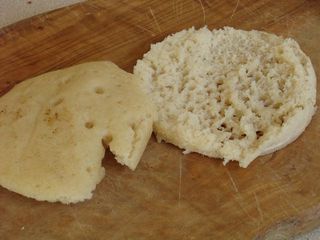 Plan B: make the next crumpet thinner, filling the ring only half-way. Once again, no running of the batter and all the surface bubbles at the right time, but when I flipped over the crumpet, I realized the fatal flaw of my plan: the bottom side now was not in contact with the pan, so it would not cook properly. I marched on, resigned to a mere data gathering experiment. Sure enough, even after a lengthy cooking, the bottom was pale and the inside, you guessed it, undercooked.

At this point the urge to throw everything in the garbage bin (pattumiera) was overwhelming and I should have stepped out of the kitchen to cool my head. Instead, I decided to warm up the oven and bake the remaining batter (still using the rings). Plan C was another unsuccessful move, and I ended up reaching for the pattumiera.

When I finally sat at my computer and searched around, I found a couple of recipes that direct you to do something that in my blinding disappointment I did not think about, i.e., removing the ring before flipping the crumpet. So, that is what I'll do when I get over my disappointment and try again (and I know I will). I am sure the book's author makes delicious crumpets the way he describes in the recipe. I wish I could watch him and see where the process I followed differs from his.

This is my contribution to Ciofeca's Day an event created by Alex of Cuoche dell'altro mondo to celebrate kitchen mishaps that have not caused lasting damage to our enjoyment of cooking.

The recent earthquake in Abruzzo, on the other hand, is a disaster that has caused loss of lives, destruction and lasting damage in a beautiful part of Italy. The hope is for the aftershocks to stop soon, so reconstruction of lives and buildings can begin. I am sending my post to Alex with particular affection, as she has special ties to the area hit by the earthquake.

Posted by Simona Carini on April 13, 2009 in Special Event | Permalink

Thanks for re-mentioning the earthquake. I am thinking I will need to do that. It has disappeared from the news.

I had no idea there was a musical based on BLITHE SPIRIT. As a playwright and Noel-Coward lover, I adore the play ANd crumpets - so very English and so lovely. Thanks for posting this. I would never have thought of making it at home!

Simona!
You make the cooking Disaster sound so sweeet!
Did you ever think of taking up writing??
I could easily see this episode as a cute video clip!

Im so sorry to hear about the Earthquake,and join you in wishing for life to be rebuilt as much as possible..and as quick as possible.

I really enjoyed the idea of your friend`s blog as a joint blog between friends who live in different places..how beautiful!

Hi Claudia. The earth seems to have stopped moving, so now begins the task of reconstruction, which I hope will be carried out quickly and responsibly.

Hi Mia and thanks for your kind words. I think writing about a disaster is helpful in putting it into perspective. When you look back at what happen, it tends to be funny.

Ha! A recipe or any other tool that provided a way to recycle bad coffee would have great environmental benefits.
==============
Detectives Beyond Borders
"Because Murder Is More Fun Away From Home"
http://www.detectivesbeyondborders.blogspot.com/

I agree with you, Peter. I wonder if, for example, some plants would like it and/or some pests would not. I have been using coffee grounds as slug control + nutrient provider in my little garden.