A little while ago, I talked about fagiolina del Lago Trasimeno, a legume typical of my home region of Umbria that is not widely known. Much more famous are the lentils grown in the upland around the town of Castelluccio. These are actually the only lentils I knew growing up. My mother always cooks them, together with cotechino, on New Year's Eve. In fact, lentils are supposed to represent money, and, in general, good luck in the year that is about to begin.

Castelluccio is not far from the town of Norcia, famous for several reasons. It is the birthplace of San Benedetto (Saint Benedict), founder of Western monasticism and patron saint of Europe. Il tartufo nero di Norcia (black truffle) is a prized local product. The word norcino (literally, the man from Norcia) in Italian indicates a butcher specialized in pork meat: based on this piece of information, you can imagine how good salumi are in this corner of Italy. 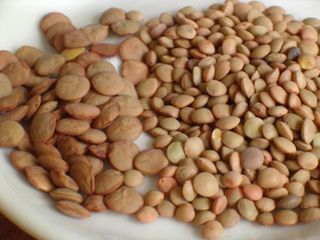 I have found that Mario Batali is also a fan of the little Castelluccio lentils, which, thanks to their small size, don't require soaking before cooking. In the photo, I have placed regular green lentils (left) and lenticchie di Castelluccio side to side to allow size comparison. As you can imagine, they are more expensive than regular lentils, but they are such a treat!

I decided I wanted to make soup with my beloved lentils. While looking around for inspiration, I came across a recipe for zuppa di lenticchie di Castelluccio that includes chicken. I liked the idea of puréeing half of the lentils and so I did the same. My soup is vegetarian and, if one omits the cheese, I guess it is vegan.

I cooked one cup of lenticchie di Castelluccio in two cups of water for half an hour. In the meantime, in a pot, I warmed up some oil then added to it a medium onion, a carrot and a rib of celery, all chopped. This is pretty much my standard base for vegetable soups, which I use when I prepare, for example, winter squash soup. After a few minutes, I covered the pot and let the vegetables cook until soft, 10 minutes or so. I added two cups of water, a teaspoon of ground cumin and half a teaspoon of smoked paprika, then cooked for another 10 minutes. I had not used smoked paprika before, and decided it was time to try. I think I was a bit shy with it, so next time I will use one teaspoon. [Update: indeed, I am now using one teaspoon of smoked paprika.]

I puréed half the lentils with the vegetables and their broth, then added the whole lentils and brought everything to a nice, hot temperature. I adjusted the salt and then served the soup sprinkled with some of my homemade cheese, a Colby this time (made according to the recipe in the book Home Cheese Making by Ricki Carroll, omitting the cheese coloring). I made this cheese in early January and let it age slightly more than two months. I am very pleased about its texture and flavor, so much so that I am making it again soon.

This is my submission for My Legume Love Affair - Ninth Helping, the popular, legume-centered event that is the brainchild of Susan, The Well-Seasoned Cook and is hosted this month by Laurie of Mediterranean Cooking in Alaska.

This page has the roundup of the event.

When you travel to the Umbrian countryside, it's easy to understand how monasticism was born there: there is a peacefulness and serenity to the rolling hills there that naturally leads to contemplation and inner-reflection. I'll never forget my one and only trip to Assisi...

I love lenticchie di Castelluccio! And the only thing better than cotechino on New Year's eve is zampone! ;-)

My recommended pairing is the funky white by Paolo Bea, Santa Chiara... be sure to try the 06 and not the 05 if it's still on your wine seller's shelves.... great post!

Oh my Simona,this is very interesting! I am a huge fan of lentils,but I never heard of these Castellucio lentils,I am intrigued! The soup recipe sounds great aswell,I must give it a try..

There are indeed some truly special places in Umbria, like Assisi. Zampone is indeed the other important item on the New Year's table. Thanks for the wine suggestion: I'll see if I can find it.

Hi Mia. I wonder if you can find them: let me know.

Really interesting, Simona! My bag says Umbrian lentils, but it sounds like they're also called Castelluccio lentils? They are such little treasures, and am so happy to have found them. I look forward to talking further over coffee. And we'll have to sneak in some conversation on making cheese. I make soft cheeses, and am now ready to tackle a harder cheese.

Hi Susan, lenticchie di Castelluccio are labeled with the IGP sticker (protected geographic indication) [see here] so I assume what you got are the same variety but not grown according the the label's requirements, hence the adjective "Umbrian" on the package. For my next post, I will include a photo of the label. I am glad you discovered them: there is no going back to bigger lentils now.