If you are thinking the name of this dish sounds cute, you are not the only one. There is actually no bird in this Tuscan dish, which I had never cooked before. The inspiration to try came from finding fresh beans still in their pods (fagioli da sgranare, literally: beans to be shelled) at the farmers' market: somehow that sight evoked in my mind the name of the dish heard of old, and it became imperative to make it come alive in my kitchen.

There is a good dose of irony in my getting excited about fresh shelling beans. As a child, I dreaded them, because shelling was a task assigned to me and I disliked beans, so there was no consolation in my toil. Now, being older and at least somewhat wiser, I approach tedious tasks like the shelling of beans with a meditative frame of mind and, of course, my taste buds welcome beans.

I forgot to write down the name of the beans when I bought them, but thanks to my friend Carol I retrieved the missing piece of information: speckled bayo. I just bought some fresh borlotti (cranberry beans) that will be made all'uccelletto soon, and the dish can be made with dried beans as well. Before describing my rendition of this dish, I will give you the link to the recipe from La scienza in cucina e l'arte di mangiare bene (Science in the Kitchen and the Art of Eating Well) by Pellegrino Artusi, the classic cookbook first published in 1891. 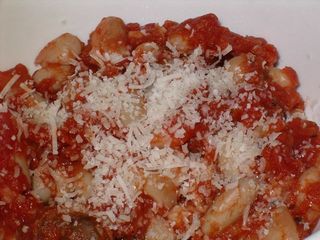 Once the shelling was completed, I had half a pound of beans. I cooked them slowly in plenty of water until just tender and drained them, reserving the liquid. I prepared a simple tomato sauce, warming up a tablespoon of olive oil in a saucepan and adding to it two garlic cloves, a few sage leaves (salvia - I used some of the pineapple sage from my herb garden) and the leaves of a couple of thyme sprigs (timo - this ingredient being my idea). After a couple of minutes, when the garlic was golden, I added a 14.5 oz can of diced tomatoes and cooked for a few minutes. I used the immersion blender briefly to make the diced tomatoes into more of a sauce, then added the beans and cooked for 12 minutes or so, until the beans tasted just right. Add some of the reserved bean liquid if the sauce becomes dry. I adjusted the salt, added freshly-ground pepper, and served the fagioli hot, topped with grated parmigiano - another idea of mine.

Addendum: Using fresh tomatoes
The borlotti I mention above were cooked all'uccelletto today and, for the occasion, I decided to make the sauce with fresh tomatoes. After all, 'tis the season. Another motivation was to give a try to this tecnique for crushing tomatoes. It worked nicely. I followed the same recipe as above until, instead of opening the can of diced tomatoes, I poured in the saucepan the result of crushing three tomatoes as in the video. I let them cook for 10 minutes, then added the beans, and followed the rest of the recipe. The sauce being more watery, there was no need for additional liquid.

This is my entry for the September edition the lovely event My Legume Love Affair - Third Helping, brainchild of Susan, The Well-Seasoned Cook and hosted this month by Lucy of Nourish Me.

Here is the roundup.

I do love freshly shelled beans, and of course, Fall is THE season for shelling beans, isn't it?

Such an elegant dish, Simona, but then, I expect nothing less from you!

Shelling beans as a young one is not the most thrilling is it? Now I can pretty much enjoy something I can do and set my mind free.
A wonderful recipe link, most interesting book.
;) Little Bird Style

Thanks for your kind words, Lucy.

No, it's not, Tanna. It's a good think in time we shed those early impressions.

And thanks for passing along the tip for crushing tomatoes. I've wanted to make fresh red sauce since the good local produce has been available, but really dreaded all the prep work.

Thanks Susan. I found that video informative and useful.

You are welcome, Maria.