dedicato a Sher / dedicated to Sher

On July 13, Sher emailed me her entry for Weekend Herb Blogging, as I was the host that week: Herbed Turkey Meatballs With Cranberry Sauce. The brightly colored photograph on the left was attached to the email. Exactly a week later, Sher passed away. I like the idea of remembering her by choosing a recipe from her blog, What Did You Eat?, and making it. Some of the recipes were inspired by Deborah Madison, who inspires me a lot as well. Out of those recipes, I chose Quinoa Chowder with Feta, Spinach and Scallions (from "Vegetarian Cooking for Everyone"). 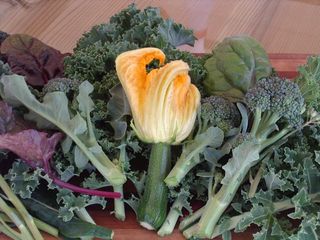 I made several adjustments to the recipe as described by Sher. I found red quinoa at the local grocery store yesterday and I used that. Instead of spinach, I used some greens from my handkerchief-size vegetable garden: mostly kale, some Swiss chard, a few broccoli florets and one baby zucchini with a big flower. Parsley from my herb garden took the place of cilantro, and coarsely grated myzithra that of feta (both are Greek cheeses, so at least here I kept geographically close to the original recipe). 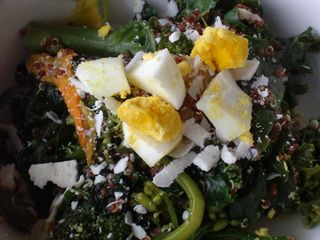 Yesterday, I forgot to buy scallions, so those were left out from the ingredient list. Finally, I decided to use only a quart of chicken broth, and so the end result was a sort of soupy stew. We had it for dinner: it was really good and I am sure I will make it again.

Sher's close friend, Glenna from A Fridge Full of Food, is collecting the links to all the tributes. 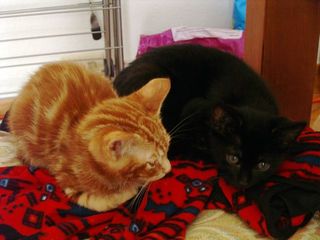 On July 4, Sher published a post about Weekend Cat Blogging, where she told the story of one of her baby ground squirrels peeing on her computer. Sher was a cat lover. By coincidence, this week, my husband and I adopted two kittens and named them Sebastian and Enrico (the black one). A photo of our furry friends completes my tribute to Sher.

Perfect, you covered it all! I remember the squirrell peeing on the computer.... Spit coffee al over when Iread that!

I always loved Sher's cat posts and was a great fan of Upsie.

Congratulations on Sebastian and Enrico. They're both very cute.

it was sad to hear of the tragic and sudden passing of such a loved blogger. your kittens are gorgeous.

A lovely tribute, Simona. Sher would have loved your kitties.

Wonderful tribute to Sher! Congrats on the two new addition to your home.

Sher would have loved having the tribute end with the kitties, what a nice touch. I am really touched that so many people are writing about her.

Thanks everybody for your kind words. Both kittens love my computer, which worries me a bit.

A bittersweet post Simona. I did not know of Sher until after her passing. I spent an hour reading her pasta recipes.

Great remembrance--thank you so much. I loved that post about the squirrels peeing on the keyboard too. So funny; so Sher!

I only heard about Sher's untimely death yesterday (have clearly not been keeping up with my favorite blogs). Your tribute is marvelous, and the inclusion of the kitties is, of course, perfect. Congratulations on Sebastian and Enrico! I love those names! And they're darling (I especially have a thing for orangey cats). We have three cats, ourselves.

You are welcome, Glenna.

Thanks Lisa. They are darlings, with lots of personality. I didn't realize you had three of them!