mangiare a quattro palmenti / to eat a lot and greedily, to eat like a horse

A little while ago Peter of Detectives Beyond Borders asked me about the original expressions in a passage at the beginning of chapter 7 of "The Smell of the Night," one of Camilleri's Montalbano novels. I promised him I would write about them, e ora mantengo la mia promessa (now I keep my promise).

to see the original versions of the sayings that in English became "count your chickens before they hatch," "eat like a horse" and "sow your wild oats" in the scene.

Here they are, in the same order:

In the original text the expressions are given in Italian, without any Sicilian influence. Montalbano gets upset at Livia, his eternal fiancée, for using a frase fatta (cliché, idiom) in a conversation and then comes up with the set of three examples listed above. You can read the the translation of the passage here, together with Peter's thoughtful comments.

The literal translation of vendere la pelle dell'orso prima di averlo ucciso is to sell the pelt before killing the bear.

The next sentence has to do with food. Palmento is the millstone (however, the Italian word most commonly used in this sense is macina) and the sentence literally means to eat like four millstones. Millstones don't eat, they grind, and in fact an alternative version of the same idiom is macinare a quattro palmenti, to grind like four millstones, i.e., like a mill that has four millstones1. The idea then is to describe a voracious person that grinds as much food with his/her teeth as four millstones grind wheat. (June 11, 2014 update: Jeremy of DoBianchi has written an informative post on the subject of palmento which includes some vintage photos.)

Cavallina is a young mare, but also the (vaulting) horse and the game leapfrog. The Italian dictionary I usually consult associates the idiom to the first meaning. Still, the construct of the sentence sounds unusual. I will tentatively translate it as to run like a young mare (unbridled).

When he first started learning Italian, my husband was intrigued by the apparent love we harbor for the numbers four and two, and he wanted to know why we did not use other numbers in the same way. Non ne ho la piu pallida idea, as my mother would answer: I really don't know. But it is indeed true that there are many Italian idioms that feature the two numbers, sometimes interchangeably. Here are four examples:

The opposite of fare due gocce is piovere a catinelle, to bucket down (no cats and dogs involved). And speaking of rain, here is an image from my garden after a night of rain. 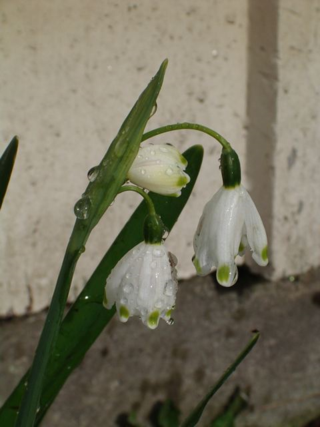 Final note: for an introduction to Salvo Montalbano, you can read this post or, better still, the novels that feature him.

1 I added this clarification after publication. Apologies to the early readers.

or launch the  mangiare a quattro palmenti  audio file [mp3].

Posted by Simona Carini on January 25, 2008 in Expression | Permalink

2 and 4, huh? I would have thought 3 with its religious symbolism would have been common.

Speaking of expressions that have to do with number, mille grazie della vostra lezione. I shall take some time to absorb this wonderful lesson in Italian.
==============
Detectives Beyond Borders
"Because Murder Is More Fun Away From Home"
http://www.detectivesbeyondborders.blogspot.com/

Susan, I think the trick would be to find a number WITHOUT religious symbolism. Six, perhaps?
==============
Detectives Beyond Borders
"Because Murder Is More Fun Away From Home"
http://www.detectivesbeyondborders.blogspot.com/

I enjoyed this post so much. I grew up with this expressions, and took them for granted. But now I use them rarely and reading about them here made me smile and reminded me of my life in Italy. Grazie Simona

This is all very interesting! I love "learning Italian" from you. Lovely photo, too.

Your posts are always so interesting and informative Simona. The best thing aboiut blogging are the new ideas and techniques we learn each day!

Is that Lily of the Valley growing in your garden? :)
Thanks once more for a wonderful lesson in Italian.

That is an interesting observation, Susan. I had not thought about it, but now I am wondering whether the idea is actually to avoid using the number three.

I am glad, Manuela. I also took them for granted until my husband started asking me about them.

Thanks Valli. I agree with you.

Hi Maryann. I believe those are snowdrops. I did not plant them, but I love them.

I love that expression, Peter!

Wow, Simona, such an interesting post! Now I'll make you laugh: I never understood what 'palmenti' were, and since I was a child I always thought they were somehow related to 'palme' (palms, like of the hands, for example), so that made some sense: 'mangi a quattro palmenti' would be 'you eat like you have four hands' (to put the food in your mouth)!!! Eheheheh :) That's what you get for never checking on the convinctions from your childhood :)

My Italian friend with the restrurant is from Alatri.
===================
Detectives Beyond Borders
"Because Murder Is More Fun Away From Home"
http://detectivesbeyondborders.blogspot.com/

With the RESTAURANT, that is.

6 does have some religious symbolism, as in the mark or number of the beast (666), though biblical scholars dicker over the provenance and meaning.

Hi Marta. I also had to look it up in the dictionary to find out what the word meant, though I did not have a preconceived idea.

I have never been to Alatri, but it is a famous place.